What have you just found out about your XC40.

It is, however heat is generated only when the phone is in the cradle (rarely in my case) and there would be a good 6-8cm to travel to the card, i don't think a wireless pad can heat up surroundings that much!
That said, the infotainment on top of the card slot runs hot...

I drove my car 300 miles and checked several times the temperature on the card slot / infotainment bottom, it was always body temperature. Sensus navigation was on and I was listening to iTunes Radio App, so my entertainment system was operating at full. I still wonder, what could heat up your entertainment system so much as to bend the credit card placed in the slot beneath? Were you using a USB stick for music or map updates?
Top

No USB or anything else, though to be fair i didn't need the card so it sat there for close to a year most probably. Maybe it got softened by cold/warm cycles during winter, who knows.
Not bothered too much about especially now with contactless up to £100. And card details can always be inputted on card readers that are more archaic and won't take contactless/Apple Pay. So yeah, realistically i haven't bothered finding out the reason
Top

ciuncky wrote: ↑
Mon Nov 22, 2021 12:13 pm
Given today's technology, i don't see an issue with leaving the card in? Mine has exactly £0 and when needed i'll transfer some money from my other bank via phone app. Takes all of 20 seconds.
Besides that, it will alert me if it's used in a different location than my phone, and it takes another 5 secs to freeze it.

I think you're all trying to make an argument where there's none. It's a card slot and you're free to put in there whatever you fancy and feel safe to do so.

Well, that’s what you have with comments on good quality cars : very few things go really wrong, so one has to make a drama out of even the slightest crisis.
Top

I've been having my XC40 D4 R-Design AWD for more than a year and I love it! I'm pretty sensitive to sounds (used to be a musician and am still enjoying a good music) and am a generation that still uses ringtones, so my iPhone rings with a different tune when my wife calls, some relative, colleagues,...
The sound in my R-Design is great so I use radio and Spotify most of the times and pretty much know all the noises and alarms my car makes. However, this week I was on my way to a business conference and back (some 1300 km in total) and for the first time I heard some very high pitch sound that lasted for about a second or two. The car was on a Pilot Assist (120 km/h) and navigation was on. At first I thought that's some alarm from my colleague's phone so I didn't pay much attention. But, after some time the same high-pitched voice appeared again. At that time I was trying to locate the alarm on my iPhone, since there was no message on any of displays in my car, plus I had to pass the intersection soon. Third time, after an hour or so, I started to worry me, but then we safely arrived at the hotel.
There was no high-pitch sound when I entered the car a couple of days later, nor when we started our journey back, so I thought everything is OK. Still, after an hour there was that high pitch alarm again! Then it hit me that sound must appear as a "wake up, pay attention!" when you are on the highway, your Pilot Assist is on and the navigation says you have to go right (or left in the UK) in a kilometer or so. Looks like your Volvo wants for you to pay more attention before you need to exit the highway and it alerts you when it estimates you might miss the exit. I've tested it on my next highway intersection and looks like that's the reason.
Have anyone else noticed this navigational + Pilot Assist alarm?
XC40 D4 AWD R-Design 140 kW 2018
Top

Well having switched to a T5 PHEV from a T4 AWD petrol I have now done 1000 miles.

Some observations about the change. I am getting between 24 - 27 miles out of a full charge around town which was about the same as the range of a gallon of petrol for my T4 on a short journey. At current prices this would cost £8.50 in petrol and is costing me £1.60 in electricity. The total mpg for the 1000 miles of mixed driving so far is 90mpg. So while I was unsure whether to switch , the high resale value of my old T4, the deal got on the PHEV and these figures seem to confirm I have made the right decision.

That's not been announced/confirmed.
The extended range is currently only for PHEVs based on the SPA architecture (i.e. XC60, XC90, etc).
MY21 T5 Recharge R-Design Pro in Thunder Grey
Top

I have loaded up a USB with 20-30 albums of music. When I play the usb it plays all the tracks in alphabetical order rather than album order. I am having little success using voice commands to play particular albums or artists but it's perhaps my accent!! Do others have success when asking for particular tracks or artists?
Volvo XC40, T4, R-Design Pro, AWD, Automatic, Thunder Cloud Grey
Top

White wrote: ↑
Sun Apr 03, 2022 8:00 pm
I have loaded up a USB with 20-30 albums of music. When I play the usb it plays all the tracks in alphabetical order rather than album order. I am having little success using voice commands to play particular albums or artists but it's perhaps my accent!! Do others have success when asking for particular tracks or artists?

Bizarre isn't it? On my 3 previous screened cars (Skoda) you *could* do advanced searches, but the basic listing had a "carousel" of albums - bit like the bottom icons on a Mac screen. You swiped across and tapped the folder/album you wanted. Once it finished, it went on to the next folder. And what showed on the SD card was exactly what I'd created in Windows. I thought that was standard

Not Volvo. They seem to expect peeps will favour streaming over local content. Yet provide a dedicated source for a device which, in its basic form, Apple stopped selling 5 years ago

Best I've got is my compilation folders under the Playlist tab. And voice selection for my ripped CDs. Right handed doddery old git trying left handed selection in a list is hopeless for me.

Still, even then, it'll present you with a list on the driver display you have to choose from - having split your stuff up.

It is what it is, and I'm resigned to it. I'm not spending any more time on it. 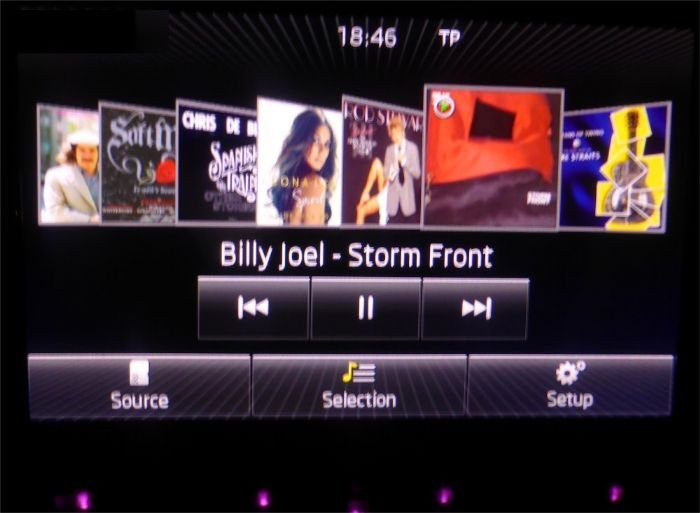 White wrote: ↑
Sun Apr 03, 2022 8:00 pm
I have loaded up a USB with 20-30 albums of music. When I play the usb it plays all the tracks in alphabetical order rather than album order. I am having little success using voice commands to play particular albums or artists but it's perhaps my accent!! Do others have success when asking for particular tracks or artists?

If you expand the tile and tap "Library", you can swipe across to "Albums" and get an alphabetical list of all the albums. Select one, tap the first track and it will play the tracks in track number order. I did have an issue early on with the same CD showing up multiple times and with some experimentation discovered that the tag "Album Artist" needed to be populated as well as "Track Artist".
This assumes your sound files are correctly tagged. Plus, I think I turned off the Gracenote look-up.
I have had no real problem playing a CD via voice control so, for example, "Play Best of the Rolling Stones" usually brings up a list with that at the top.
Stanno
Momentum B4 FWD, Denim Blue, Climate Pack, Versatility Pack, Origin Inlays
Ordered : October 2020
Collected : 01 March 2021
Top
Post Reply
492 posts

Our Volvo XC40 Forums are free to join and open to all.